My second born child, a daughter with brown eyes of amber hue with a lilt of green from her father's side. She came to me from a flawless pregnancy and birth though I gained terrific amounts of water weight in those 42 weeks; probably why she loves the embrace of water. Named for a stunning horse i had rescued and retrained during her becoming inside my womb. Awesome brown horse, with beautiful brown eyes, maternally superior, begetting speed and strength in her foals. She was exceptional. I had hoped as much for my child.

My favorite memory of those new baby times comes from crossing a parking lot, holding my bundled Quilla close to my chest as we walked toward the giant box store. I must have been beaming and cooing to my wee lass as a passing stranger remarked, "....that child is loved...". Yes, this child is loved, my thoughts as I held her closer. I will never stop holding you.

An April child, surrounded by the songs of birds she drew herself nearer to the sounds of music beginning with clarinet and exploring still other woodwinds. Proficient in reading and playing music she exceeded my limit in those fine arts. Don't settle for less than you're own expectations. Be deserved more than desired, as it is a greater value for you.

She is patient and quiet when she's not leaping great heights without surveying the landings. I think I did that when I was her age. I recall sprinting down a mowed slope at a civil-war battle monument park, reaching a stone wall only to nimbly vault over the flat top, landing squarely about 8' feet down on the other side. Pausing my dash, I swiveled to gaze at the massive river only 50' away as it dawned on me that I leaped without looking. As the slope continued steeply, I could have fallen into tree tops, or concrete, or into the river. But my angels landed me safely on firm grassy ground.

I hope for you Quilla, your angels are always landing you safely when you leap  with great vervre  over random obstacles under skies filled with possibilities. Look before you leap as you reach for your potential and  live your dreams.

Have a groovy birthday Quilla Frances... be a work in progress all of your life.
English vernacular for Aquilla the center most constellation on the equator. Eagle.
Frances the patron saint of nature, the  purveyor of peace. 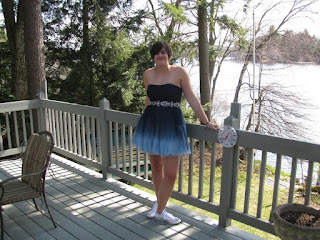 Whoa, this photo triggered an instant flash back. Some years ago, bikerman and I stopped at Onion Flats in Bethel VT. A warm summer evening, the foodie house was filled with people young and old. Our vintage Harley was the only bike in the crowed lot. Roiling the hard-pipes thunder before shutting the shovelhead down, everyone turned their heads to the rumble. In front of the bike, a little boy, clasping his grandma's hand,  stood wide-eyed at the shiney bike and leathered-up riders. When he removed his helmut, bikerman asked the small child, "if he'd like to sit on the motorcycle..." To which the child shrieked, shaking his head NO! and ran behind his Grandma. She on the other hand, was smiling large and took a step toward the bike. . . I think she must have wanted a ride on that old skool, outlaw bike..... gotta watch out for them old ladies, they're bold.

the day I forgot my camera, riding naked

Disoriented and a little lost, I missed the lens and looking for good subject matter to memorialise our motorcycle escape of the day. As the pillion, it's what I do. Pillion's expected duties:  look good on the bike, buy lunch, take pictures.....and most recently, don't start any fights.

When it was proven in a 2008 BRC motorcycle class,  I couldn't and shouldn't drive a 2-wheeled cycle on my own, I searched for and rode with many kind motorcycle enthusiasts who offered a second seat and shared the ride. Making a record of the outing was a subtle way to insert myself into the motorcycling community. It has evolved into a psuedo-elite assignment that validates my thirst for this culture of  challenge, resilience and  the other adventures. But  then a day came when I didn't have my trusty, tiny Pentax adventure camera; left behind in my son's back pack, it would not be back in my hands nor on a ride for a week.

Nonplussed at first, my empty pocket was  merely a brief distraction; until he started the engine and the bike rumbled to life. The first few feet of rolling out the door yard felt oddly unfamiliar to me. Then refreshingly intimate as  my attention was more focused on my bikerman chauffeur, now held with both of my hands, the lo ride motor-sickle steady and sure beneath us, my heightened senses of riding 'naked' (at least visually naked) filled my internal moment of re-adjustment. One layer , my small camera, removed and I was flying through the vast surround of green, and wind, breathing wholly  the familiar smells of engine heat, biker leathers and sweat-stink helmets. I, boots hooked on the chrome pegs, grooving with my driver's every lean and list of his vintage bike as we threaded potholed lanes, rounded sweeping corners, and brushed arching trees pushing into our lane, without the distraction of composing a picture, was filled with a rush of gratitude.

Riding on a motorcycle bathes your senses in the all of it. Keeping my little camera in my hand or up to my eye was as dense a filter as a suit of armor. While it taught me to view the scene from the perspective of a framed and finite image, which in time,  honed my mind's eye for that capture, it often left me deeply disappointed that the vast enormity of the sky or the expanse of mountain or meadow scapes, the depth of color and weight of the air,  was left out of the captured picture. My photos are meant to stimulate imagination of voyeurs or to evoke a latent, complex memory within our ride; both of which seem to elicit the dimension  of time and space that we travelled  through.

Riding naked, visually naked, was a rebirth into the censorial infinity of motorcycle riding. Travellers through time and space, awakened to every fragile element of living...that's why we ride and why I some times won't take pictures.
~ luv, peace and love ~ el

special thanks to the biker chauffeurs who shared the ride, sparking a romance for motorcycling and with deepest gratitude for my bikerman who rolls the sentimental journeys with the one he calls, Pillion Resa (my biker name)
Posted by resa at 12:53 PM No comments: